National  IEC invites public comments on unchanged proposed rates for municipal elections           National  Evaluation of China's vaccine for use in SA at advance stages: SAHPRA           Cricket  Rain stops World Test Championship final again           International  Germany opens antitrust probe against Apple           General  Do you use water? Then this talk is for you!
Loading

UNIONDALE NEWS - The Department of Employment and Labour confirmed on Monday 9 November that it has opened a case of fraud against the Uniondale Integrated Empowerment Project (Uniep) for applying for and receiving almost R5-million from the Covid-19 Temporary Employer/Employee Relief Scheme (Ters).

The department said Uniep allegedly also kept part of the proceeds as bank charges, "... which meant that the employer benefitted illegally to the tune of R96 000".

The department said it responded to a complaint about Uniep that claimed for Ters funds on behalf of 520 employees whose contracts of employment were terminated on 25 March 2020, just before lockdown. The Covid-19 Ters fund, administered by the Unemployment Insurance Fund (UIF), is for workers whose salaries have been affected by the lockdown period while they are still employed.

"The business is a non-profit organisation contracted by the Department of Public Works to perform Expanded Public Works Programme (EPWP) projects in the area ranging from classroom assistants, vegetable gardens, home-based caring, Early Childhood Development, HIV and Aids awareness programmes, and cleaners at government departments and institutions. The organisation had employed approximately 520 workers," said the department.

The provincial chief inspector (PCI), David Esau, met with the CEO of the organisation as well as with some of the employees who confirmed that they had received payments.

Speaking on behalf of Uniep, Jitesh Naidoo, the financial controller, said he could not comment until the department has come up with documentary
proof for what is being alleged. "We've done nothing wrong and can account for every cent that has come in and gone out."

According to the department, its inspectorate determined that Uniep received Ters funds during the following periods:

The department said it would be registering the matter with the Oudtshoorn Police Service as a fraud matter. "... the employer declared that the employees are receiving reduced salaries and are still employed, although the department can confirm that the contracts of the employees were terminated on 25 March 2020.

"The work of the Inspectorate will serve to amplify the 'follow the money' initiative of the UIF where similar auditing processes are followed to determine that the correct Ters amounts were paid to eligible recipients." 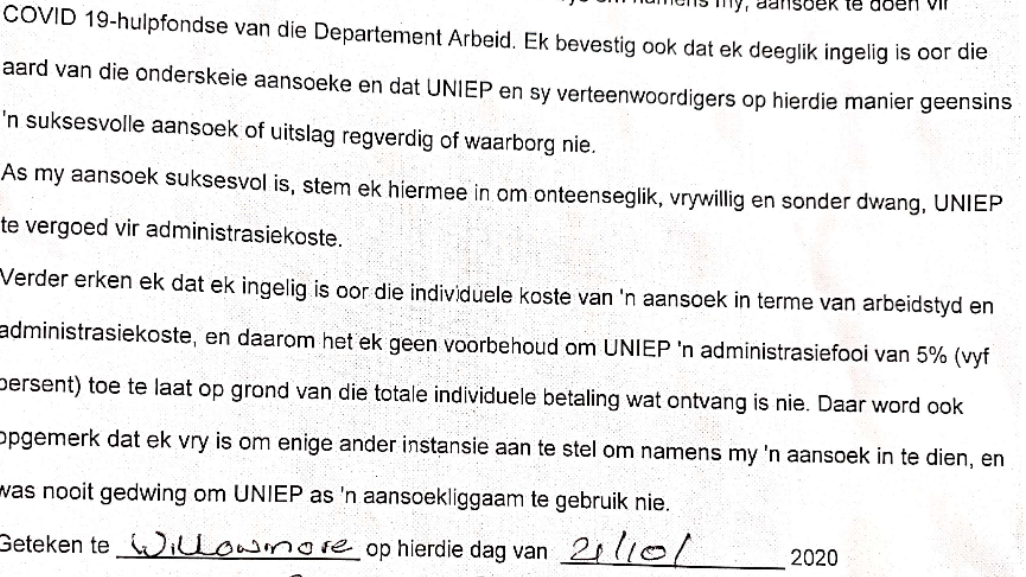 A section of the agreement signed by employees of Uniep to the effect that an administration fee may be deducted from the Ters funds deposited into their accounts.

'We bring you the latest Garden Route, Karoo news'