National  IEC invites public comments on unchanged proposed rates for municipal elections           National  Evaluation of China's vaccine for use in SA at advance stages: SAHPRA           Cricket  Rain stops World Test Championship final again           International  Germany opens antitrust probe against Apple           General  Do you use water? Then this talk is for you!
Loading 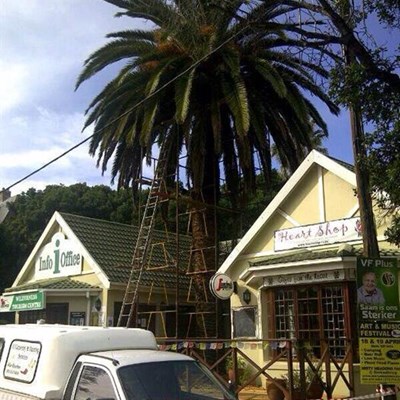 Natalie de Wit took this photo on Monday of a contractor preparing to cut down the palm tree.
GEORGE NEWS - Wilderness locals have reacted emotionally to the felling of an old palm tree that has been part of the George Road landscape for decades.

They drew up a petition to try to save the tree that used to tower in front of the building housing the Wilderness Tourism Bureau, among others, but a large gap is all that will remain.

"The tree was an integral part of the Wilderness landscape," said Rudolph Grobler, one of the residents.

Gert Coetzee, the owner of the building and not a very popular man at the moment, said he did not want to cut down the tree, but it was a decision taken in collaboration with his attorney after two customers had been injured in December after slipping on fruit that had fallen from the tree. He bought the building fairly recently.

Defending his decision, Coetzee told the George Herald, "What is at stake here is the liability for the safety of people using the walkway underneath the tree. In addition to the fruit, the tree also sheds large branches, which are potentially dangerous. It can also topple over onto the building."

Wilderness Ratepayers' Association Chairman Pieter Naudé said the tree had been there before the building was constructed, which was done in such a way as to preserve it. "It was a landmark. It is unfortunate that the community did not have the opportunity to give input and that alternatives were not considered."

Chantel Edwards-Klose, the media liason officer for the George Municipality, said only certain indigenous tree species are protected under the Forest Act, in which case permits are required when felled.

"A private landowner may handle 'unprotected' trees on his/her property as they see fit with the owner having no legal duty to inform neighbours or the local authority, although it is always a good idea to inform other parties."