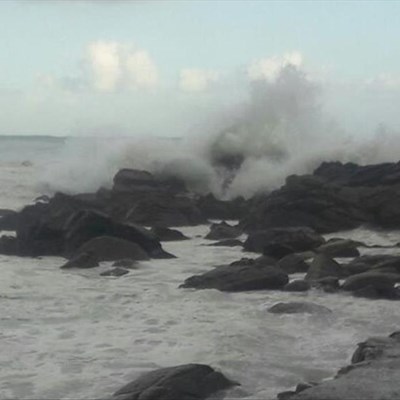 Huge waves crash onto the rocks at Victoria Bay.

GEORGE NEWS - Mopping up and cleaning operations at Victoria Bay started early on Friday morning 25 August after extremely high seas caused some damage to the area.

One of the holiday houses bore the brunt of the powerful waves. Windows and doors were knocked out and wooden floors and furniture were destroyed.

Next door, at Holdall, most of the garden wall was destroyed by an extremely large wave that crashed in over the roof.

"Our electricity box washed away, some of our furniture was soaked and we had to sleep in a hotel on Thursday evening," said resident, Maureen de Jager. Minor damage was caused to other houses down the road.

According to the Cape Town Weather Office, these conditions were caused by the cold front that moved over the area earlier last week.

This cold front was associated with an upper air trough system.

Behind the cold front, to the west of the country, there was a strong high pressure system, around which the wind flow had a large fetch length, meaning the wind blew continuously over a big distance of water.

According to the weather office, this kind of situation is commonly favourable for the generation of a high sea state. Very rough seas are usually observed, especially if the winds along the coast are particularly strong, and occasionally it is accompanied by high seas, as was the case with this last system.