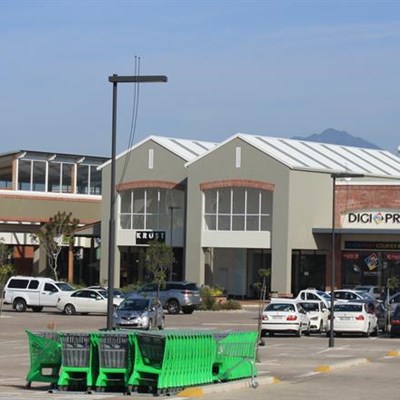 Eden Meander has been sold to Accelerate property fund. Photo: Alida de Beer
GEORGE BUSINESS NEWS - The Accelerate property pension fund that has acquired the Eden Meander Lifestyle Centre is staying mum about the details of the transaction.
Leon Louw, executive portfolio manager at Accelerate, declined to comment.
The transaction was apparently finalised on 5 October, Eden Meander's birthday month. The centre officially opened on 29 October last year. Partners in Laritza Investments, the previous owners who developed the centre, did not respond to requests for comment. Partner Gerrie Cronjé's personal assistant, indicated that he would comment at a later stage.
Eden Meander is anchored by Checkers Hyper and Builders' Warehouse. Other tenants include Sportsman's Warehouse, House and Home, Pick n Pay Clothing, The Golf Pro-shop, Mambo Plastics and Golden Harvest.
A new centre manager, Natascha Dreyer, has been appointed.
Accelerate states on its web site that the acquisition of Eden Meander allows them the opportunity to add a new strategic node to their portfolio in keeping with their goal of developing and growing strategic nodes across South Africa.
"It also allows for a natural expansion in this node as there is a considerable amount of bulk that can be unlocked in the area. This potential will be realised in the coming years as George is one of the fastest growing towns in South Africa."
Other nodes owned by Accelerate include property on the Cape Town foreshore, as well as Fourways and Charles Crescent, both in Sandton. In addition to Eden Meander, two other recent acquisitions listed are the Portside Tower in Cape Town, and KPMG offices across the country.
ARTICLE & PHOTO: ALIDA DE BEER, GEORGE HERALD JOURNALIST
'We bring you the latest George, Garden Route news'