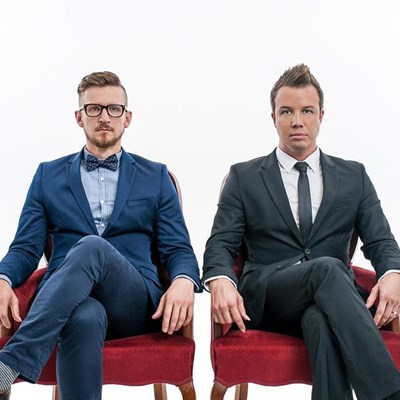 South African guitar duo CH2 will perform at the Maritime Museum on 14 October at 19:30.
SOUTHERN CAPE NEWS - The Mossel Bay Arts Society is privileged to bring internationally acclaimed South African guitar duo CH2 to Mossel Bay, but for one performance only!
On Wednesday 14 October at 19:30 in the Maritime Museum Corneille and Leon are set to entertain with a repertoire including compositions of their own, classics as well as renowned and modern masterpieces. Their reputation promises a performance delivering both style and excellence, a rare combination.
Since 2008 CH2 have wowed audiences across the country delighting with their ability to delight with a variety of swinging and moving music and classic guitar skills. Their debut album Pap and Paella was topped by It’s About Time and 2009’s The Orange Guitar. In 2011 they produced the critically acclaimed album Ping, and after the 2012 release of the pair’s symphonic mélange of rich and textured classics, Corneille Hutten-Burger and Leon Gropp mixed things up a little.
Soos in die ou dae is the name of their latest album which takes listeners back in time with tracks like Vyfster, Tussen Treine and Voshaarnooi.
The duo have had two highly successful trips to the USA. At the 2011 Lee Ritenour Six String Theory International Guitar Competition World Finals in Bigfork, Montana – the competition similar to a "world finals" for guitar players - competing against guitarists from a number of nations, CH2 won the World Classical/Flamenco category.
The duo is now a member of the Grammy Foundation and counts amongst its achievements a collaboration with the internationally acclaimed Soweto String Quartet. Thus a new genre has evolved, referred to as "African Latin".
A diverse and entertaining programme for the Mossel Bay Concert in October can be expected. Due to CH2’s popularity the Mossel Bay Arts Society has already received request for tickets from people in surrounding towns in the Southern Cape will therefore issue tickets before the show because of the restricted seating in the Museum. There will be a limited number of tickets available.
Tickets cost R100 (R80 for Arts Society members) and can be obtained by request email to artsocietymb@gmail.com or by calling Annette Strydom on 076 857 2900. Tickets will be reserved once payment is received.
Unsold tickets will also be available at the door on the night of the concert at the same cost. Membership of the Mossel Bay Arts Society can be arranged at the door.
'We bring you the latest Garden Route, Klein-Karoo, Hessequa news'