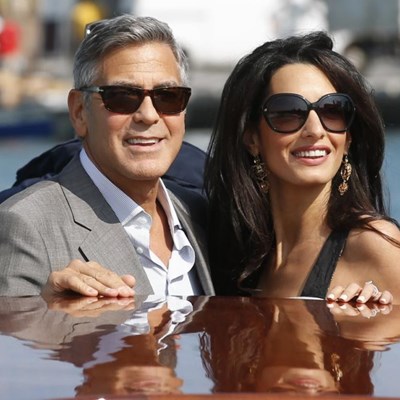 The pair, who have whipped up a frenzy in Italy's floating city with four days of lavish nuptial celebrations, are expected to whizz to the grand 13th century Palazzo Cavalli around 12 noon (1000 GMT) in their vintage speed boat "Amore".

Boats loaded with onlookers waited outside the couple's luxurious Cipriani hotel in Monday morning sunshine, as paparazzi lined the banks of the Grand Canal ready to capture sought-after images of the couple.

At city hall, the pair will be officially married under Italian law by former mayor of Rome Walter Veltroni, a long-time friend of the silver-screen star who was seen getting ready at the Cipriani, where the wedding party has been staying.

The photogenic pair who share a passion for human rights have spent the weekend celebrating with family and Hollywood chums including Matt Damon, Bill Murray, Cindy Crawford and her husband Rande Gerber -- rumoured to be Clooney's best man.

It wasn't clear whether they would join the Clooneys at the civil ceremony on Monday, but sightings of Murray on a drunken stroll through the city's cobbled streets late Sunday suggested that if they do attend, they might be doing so on a hangover.

Rumours were rife that the newlyweds may go on a romantic gondola ride through the City of Canals after the ceremony, with a possible stop at the historic Bridge of Sighs, where legend has it lovers secure themselves eternal bliss with a kiss.

After a fairytale weekend of champagne soirees and opulent dinners, the couple may come face to face with a more stark reality at the town hall, where council workers hit by the economic crisis are planning to stage a protest over salary and budget cuts.

The cries of those furious over a string of corruption scandals in Venice, however, are likely to be drowned out by the screams of ecstatic fans, who could be seen grabbing the best spots in the morning to get a glimpse of the bewitching pair.

The Hollywood heartthrob and his wife cut an elegant pair on Sunday when they led a flotilla of boats down the Grand Canal, after dancing nearly till dawn during a star-studded overnight ceremony and party.

"The wedding was more than perfect," Amal's father Ramzi Alamuddin told AFP, describing the festivities as both "grand" and "simple".

He added that the couple were a great match and "very happy" about how they were welcomed in Venice.

"It is very good news among the bad news we are living now," he said, referring to the unrest in the Middle East and on the borders of Lebanon, where the bride was born.

Human rights lawyer Alamuddin, who moved to Britain when she was a toddler, looked effortlessly graceful in a long-sleeved white lace Giambattista Valli dress covered with pink and red flowers in her first public appearance as Mrs Clooney, while the US actor was suave as ever in a finely cut grey suit.

During their brief public outing 53-year-old Clooney was begged by the crowd to show off his ring, a wide band in white gold -- and jokingly looked at his right hand in surprise.

Alamuddin's ring was more delicate and looked like it featured a band of small diamonds.

They are expected to spend their honeymoon in Morocco's former imperial city of Marrakech at the Aman resort, according to a source.

The pair said "I do" late Saturday at a private ceremony in Venice's palatial Aman Canal Grande hotel, before celebrating with a star-strewn guestlist in one of the eagerly awaited celebrity weddings in years.

There were wolf-whistles and cheers as the actor scooped his new wife into his arms for a nuptial kiss, and his hands were shaking so much that he did a botched job cutting the wedding cake, a source close to the hotel said.

Clooney, who has owned a home in northern Italy for years, was married once before, to "Mad Men" actress Talia Balsam, but the pair split in 1993, just before his breakout role in the TV series "ER" propelled him to the status of global sex symbol.

Alamuddin's rights work has involved representing Wikileaks founder Julian Assange and the pair met in Rome at the end of last year, before getting engaged in April.