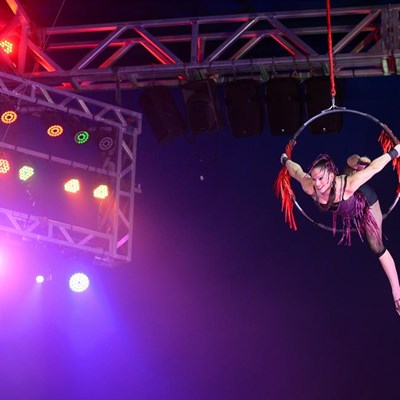 AUSSIE Circus promises to be a breath taking experience. The all star cast is in George this weekend. INSERT: Flying high... AUSSIE Circus is an all human show with captivating performances.
GEORGE NEWS - Following its international debut in Cape Town, the world class international production AUSSIE: The Australian Circus Spectacular is coming to George this weekend, 19 to 21 February, for a limited season only - so don't miss out.
AUSSIE Circus is a show that will have the whole family entertained, laughing and cheering with delight.
With a star-studded international cast, George is in for a rare treat including performances and death defying acts such as: The Human Cannon; FMX Freestyle Stunts; Albert the Illusionist; Kiarnna Queen of the Silks and the most hilarious clowns you will see this year. All this excitement will take place under the Circus Big Top that is being erected on the sports field at PW Botha Kollege, York Street, George.
AUSSIE Circus also has a local connection for the city of George, through the executive producer, Sebastian Cassie whose parents grew up in Pacaltsdorp before immigrating to New Zealand and Australia.
"I really hope that the people of George come out and support AUSSIE Circus, because this is a home coming for me and a rare opportunity for my two homes, Australia and South Africa, to come together and share in something truly magical."
AUSSIE Circus is an all-human show that presents some of the world's most amazing, extreme and captivating performances. There is truly something for everyone - and for those wishing to run away with the circus there is always the chance that you might be pulled up on stage to show the AUSSIES some local George talent.
"There is something really special about being able to bring an international world class production like the AUSSIE Circus to a town like George. Unfortunately, beautiful towns like George often miss out on international productions like ours. But not this time. AUSSIE is definitely coming to George.
"When I told our circus stars that we were going to do a short show season in George, you should have seen the excitement and delight on their faces. I really can't wait for our opening night and to hear the roar and laughter of the George audience," says Sebastian.
Among some of the other talent that will be on show are trapeze artists, a young hula-hoop superstar who has performed on The Oprah Winfrey Show, and the extremely dangerous Globe of Death.
The George show season runs from 19 to 21 February, so for those wanting to see this incredible circus production, book your tickets now because tickets are selling fast.
Show times:
Friday 19 February
19:00
Saturday 20 February
15:00
19:00
Sunday 21 February
10:00
14:00
19:00
Tickets are available online at Computicket, via phone by calling 0861 915 8000, on-site at the box office, or in-store at Shoprite, House and Home, Checkers and Checkers Hyper stores.
Flying high... AUSSIE Circus is an all human show with captivating performances.
'We bring you the latest George, Garden Route news'