More than meets the eye at horse shows

But, says coordinator of the show and exco member of GRC, Linda Squair, it's about so much more than just the horses and the riders.

SPORT NEWS & VIDEO - Compliments and messages of congratulations and thanks flooded the George Riding Club's (GRC) Facebook page this week after they hosted an extremely successful eventing show on Saturday and Sunday, 29 and 30 May.

A total of 135 horses and riders, with their families, from across the Western Cape as well as Gqeberha, took part in the second eventing show held at the GRC since the outbreak of Covid-19. For some riders this was also their first 'away' show.

But, says coordinator of the show and exco member of GRC, Linda Squair, it's about so much more than just the horses and the riders.

"Yes, we appreciate everyone who entered, whether they are local or visiting, but the general public doesn't always realise what goes on behind the scenes with an event like this. Members of the riding club, volunteers, riders, marshals, medics, vets and grooms put in days and days of hard work - not to mention the revenue it brings George and surrounds," she says. This was the third big show hosted at the GRC during the past year, after the Autumn Show in April this year and an eventing show in August last year.

"We had 135 riders that participated in the event. Of these approximately 90 riders were from Cape Town, Gqeberha and East London. The balance of the riders were from Plettenberg Bay, George, Stilbaai, Knysna and Mossel Bay," said Squair.

"Most of these riders came with their families and booked in at accommodation facilities throughout George."

According to Squair it took about 80 people including judges, course builders, technical delegates, organisers and judges to put this show together.

"Preparation for such an event can take anything from six weeks to two months. It depends on many factors of which our sponsors play a vital role. Also, any show held at GRC cannot go ahead without the municipality's approval and assistance. We thank them, as well as every single person that volunteers their time for this lovely sport," she says. 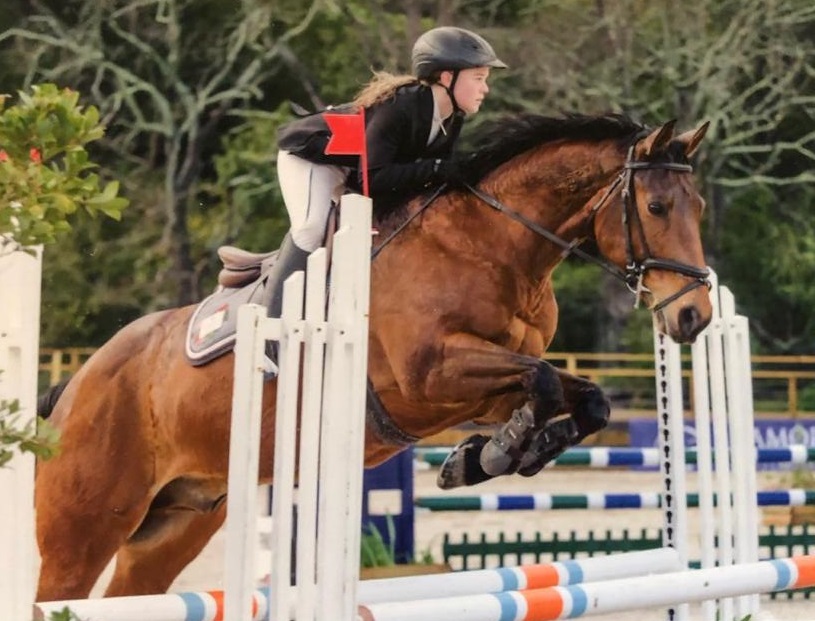 Winner of the Junior EV95 class Holly Crowther and her horse Mick Dundee on their way to victory. Photos: G Photography

VIDEO: Holly Crowther and her horse Mick Dundee horsing around: