In a race that met the hopes of Formula One's global legion of spectators, Hamilton's guile, allied to Mercedes' strategy, enabled both to defy the odds.

Marko, a 77-year-old Austrian who is a senior team figure and close to Red Bull founder-owner Dietrich Mateschitz, admired Hamilton's tactics and skill in laying a trap before fending off the faster Red Bull car to triumph by seven-tenths of a second.

In a race that met the hopes of Formula One's global legion of spectators, Hamilton's guile, allied to Mercedes' strategy, enabled both to defy the odds.

Marko is notoriously difficult to please but said Hamilton had been clever in the way he managed the closing laps when it looked certain that the Dutchman, 13 years his junior and with an edge in pace, would pass for victory.

Verstappen went round Hamilton at Turn Four with four laps remaining, but the move cost him the race. He damaged his tyres and also crossed the lines marking the track limits. The race director ordered Verstappen to give the place back.

"According to Max, it was the sporting thing to do," said Marko.

"He wasn't even back on the ideal line when the call came that we should let Hamilton pass. I have no idea what would have happened if he hadn't done that.

"Lewis was smart because he let himself fall back on purpose until he caught up with Verstappen again."

Hamilton's move encouraged Verstappen to close up but that allowed Hamilton to control the Dutchman's position as he picked up air turbulence and dirt on his tyres.

"But he had a revival and because of that dirt on our tyres a final attack from Verstappen was not possible."

The 36-year-old Briton's performance defied the odds after he had been outpaced both in pre-season testing and through two days of practice and qualifying ahead of the long-anticipated showdown.

It was little wonder that his Mercedes team revelled in their victory, built on an aggressive strategy that enabled them to steal the initiative from pole-sitter Verstappen with an early 'under-cut' pit stop and then set the tempo.

Hamilton's team radio chat after the chequered flag was jubilant.

"What a job! A crazy race Lewis, but such an amazing drive," said his race engineer Peter 'Bono' Bonnington.

After thanking his team, Hamilton added: "We managed to do it. We're not giving up. That's a team... Yeah, still got it Bono!"

"Not bad for an old man," replied the Bonnington.

Hamilton's win was his first in a season-opener since 2015, increased his record tally of victories to 96. It was the 300th by a British driver, his 75th for Mercedes. On the way he took the record for race laps led, from Michael Schumacher, with a total of 5,126.

Despite Red Bull's excellence and speed, which had made them pre-race favourites, Mercedes lead the driver and constructor championships -– extending their unbroken run on top of both to more than two years since the 2018 German Grand Prix.

Hamilton's 'black arrows' team-mate Valtteri Bottas finished third but was unhappy with his race, in spite of setting the fastest lap. 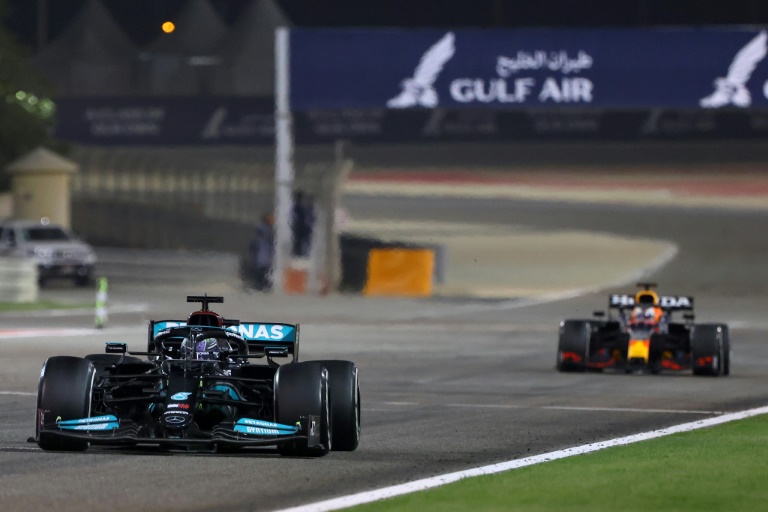 Verstappen spoke of looking at the positives, but he and Red Bull had missed a huge opportunity to derail the champions.

Mercedes, inspired by Hamilton and with their confidence buoyed, will use the three weeks before next month's Emilia Romagna Grand Prix to claw back more of their lost aerodynamic performance.

After Sunday's magnificent and spectacular contest, which delivered all the long-awaited drama of a classic champion-versus-young pretender duel, another titanic scrap is in prospect.