The GolfRSA Squad duo will try to chase down the leaders in Thursday’s final round at the par-72 Pantal Indah Kapuk (PIK) Course after both finished second overall in the respective Girls and Boys Class A Divisions in the 15-18 year age groups.

Streicher followed a level par opening round with a one-under 71 to finish on one-under 143.

The 2019 SA Women’s Amateur semi-finalist is just three strokes behind defending champion Phannarai Meeson-Us from Thailand. “I really enjoyed playing with the past champion and I’m looking forward to going head-to-head with her the final round,” said the Swellendam teenager.

“It made such a difference to have an early start today. The heat and humidity in the afternoon is intense and it distracted me over the closing holes during the first round.

“I made a bogey start, but I sunk a 15-footer for birdie at the third to bring it back to level. I had a few birdie chances on the front nine, but only managed to make the one, but I got it to two-under with a birdie at 10.

“I played the rest of the back nine in straight pars, but unfortunately I dropped at the last. All-in-all it was another great ball-striking day. I only missed one fairway and the putter was good, too.”

South African Golf Development Board member Van Wyk, who opened with a two-under 70, dipped to six-under 138 with a second round 68. 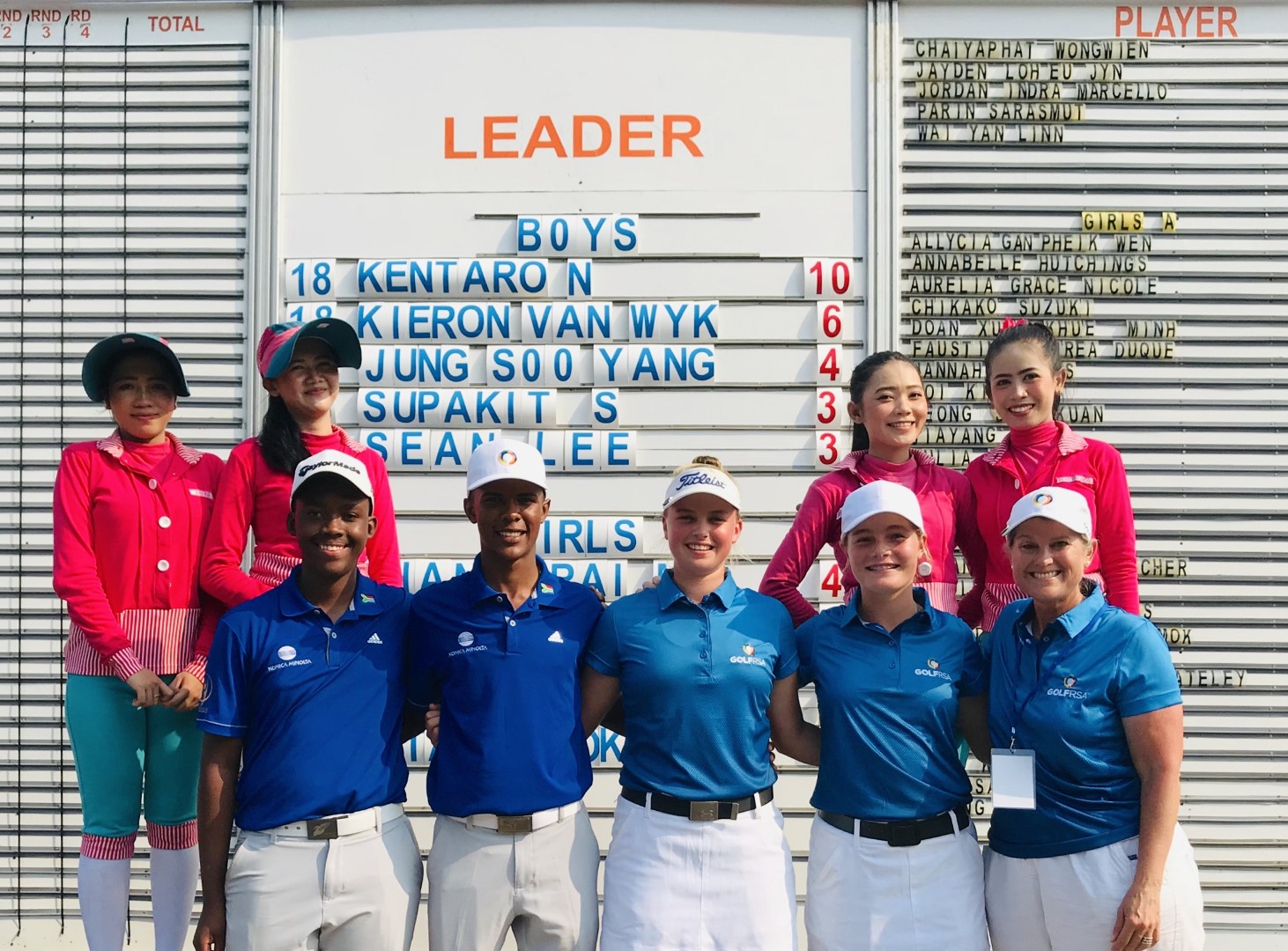 Team GolfRSA after round two of the ATI Ciputra Golfpreneur Junior World 2019, presented by AKI & supported by the Junior Golf Tour of Asia at the Damai Indah Golf & Country Club in Indonesia; credit GolfRSA.

The Ruimsig golfer moved within four shots of defending champion Kentaro Nanayama from Indonesia, who kept pole position with successive rounds of 67.

“The course set-up was very similar to the first round, but my ball-striking was infinitely better,” said Van Wyk after a nearly flawless round. “There were a few tricky pins where you needed to hit the green, but I swung the club so much better. I managed myself well out there and only had one bogey on the card at the tough 18th.

“It was great playing with Kentaro and seeing how he manages himself around this tough layout. The putter wasn’t as cooperative in round two, but hopefully I can get it going early in the final round to put some pressure on him.”

“I made a couple of bogeys out of the blocks, but I managed to steady the ship with some pars and a birdie at the sixth and I turned three-over,” said the Country Club Johannesburg golfer.

“I started the back nine with three straight pars, but unfortunately I had a few bogeys over the closing holes that really hurt the scorecard. The putter was ice-cold all day, so I was really pleased to birdie 18. I hit a great iron shot to tap-in to make three on what is really a tough closing hole.

“Scores aside, I am having a fantastic tournament. I’m not playing at my best, but I am relishing the chance to gain international experience. Hopefully the putter warms up for the final round so I can go out there and put together the kind of score I knew I am capable of posting.”

The last player in the South African quartet competing in the world golf ranking event, sanctioned by the Junior Golf Tour of Japan, is Rori Nkosi.

Making his second appearance in the Boys Class B Division for the 13 to 14-year-old age group, the South African Golf Development Board member will start the final round in a tie for sixth with Joaquin Hernandez from the Philippines on 10-over after rounds of 76 and 78.

“I racked up five birdies today and I split the course each time, so that really pleased me about my round,” said the Pecanwood junior. “I gave myself opportunities for birdies and hopefully I can sink a few more putts in the final round and limit the mistakes.”

Van Wyk and Nkosi held on second place in the Boys Team Competition.

The scores of one Class A and one Class B player counts towards the team’s daily score and a total of 15 teams entered the competition. The South African duo finished on 292, and is seven shots behind leaders Thailand 1.