Mickelson eyes elusive US Open after historic PGA win at 50

The 50-year-old US left-hander swiped an iconic victory for the ages - and the aged - on Sunday, grinding out a two-stroke triumph at windy Kiawah Island for his sixth major title.

Ageless American Phil Mickelson has his sights on the US Open after capturing his sixth major title at the PGA Championship.

The 50-year-old US left-hander swiped an iconic victory for the ages - and the aged - on Sunday, grinding out a two-stroke triumph at windy Kiawah Island for his sixth major title.

"I've believed for some time now without success that I could play at my best and compete in major championships still," Mickelson said. "But until this week, I haven't proven it to myself or anyone else."

Transforming mind and body with work and discipline, Mickelson has new inspiration to challenge the US Open, the one major he has never won and an event where he owns a record six runner-up finishes, the most recent in 2013.

This year's US Open is next month at Torrey Pines, near Mickelson's San Diego home, and he turns 51 on June 16, the eve of the opening round.

"I do believe that if I stay sharp mentally I can play well at Torrey Pines," Mickelson said. "I know I'm playing well and this could very well be my last really good opportunity to win a US Open, so I'm going to put everything I have into it."

Mickelson needs the US Open to join Tiger Woods, Jack Nicklaus, Gary Player, Gene Sarazen and Ben Hogan as the only golfers to win all four major titles in their careers.

"I'll take two weeks off before that and go out to Torrey and spend time on the greens and really try to be sharp for that week," Mickelson said.

"Lefty" had not won a major title since the 2013 British Open but has taken the long road back to surpass the prior age mark of 48 set by American Julius Boros at the 1968 PGA Championship.

"Certainly takes more energy out of me, but if I work a little harder, spend a little more time in the gym, eat well, practice hard, there's no reason why I can't put it all out there for 18 holes," Mickelson said.

For Mickelson, that has meant clearing his mind through meditation in order to stay calm under pressure.

"Just the ability to kind of quiet my mind and get rid of all the exterior noise," he said. "I don't want to get all spiritual but that has kind of been the biggest thing for me.

"I've tried to shut my mind to a lot of stuff going around. I wasn't watching TV. I wasn't getting on my phone. I was just trying to quiet things down." 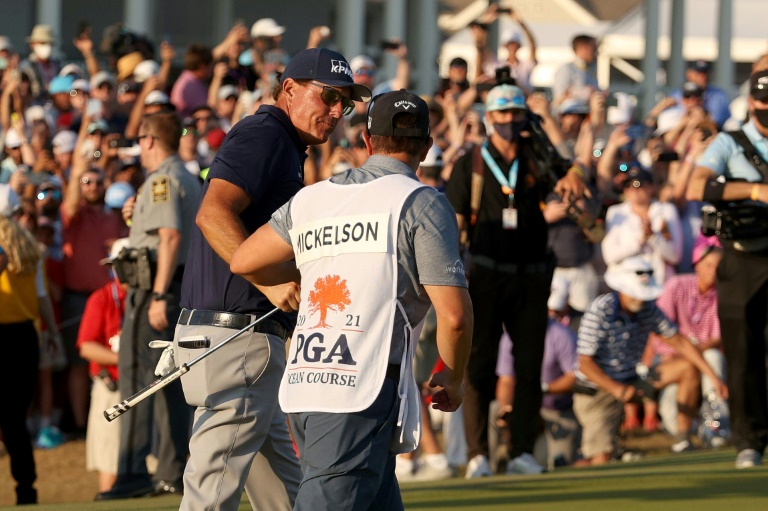 Phil Mickelson celebrates with his brother and caddie Tim Mickelson after winning the PGA Championship.

It also means Mickelson, who fasts 36 hours each week, watches what he eats far more than when he was younger, in part to fight psoriatic arthritis.

"It has been a blessing for me because I feel better and I don't have inflammation and I wake up feeling good. It has been a sacrifice worth making."

'Was a lot of doubt'

Mickelson had 16 events without a top-20 finish over the past nine months, but delivered an all-time classic to defy Father Time.

"It's very possible that this is the last tournament I ever win, if I'm being realistic," Mickelson said.

"The point is that there's no reason why I or anybody else can't do it at a later age. It just takes a little bit more work."

Mickelson admitted it was tough going without seeing solid results until this week.

"It's very exciting because I've had a few breakthroughs on being able to stay more present, more focused, and physically I'm striking it and playing as well as I ever have," he said.

"Although I believed it, until I actually did it, there was a lot of doubt."