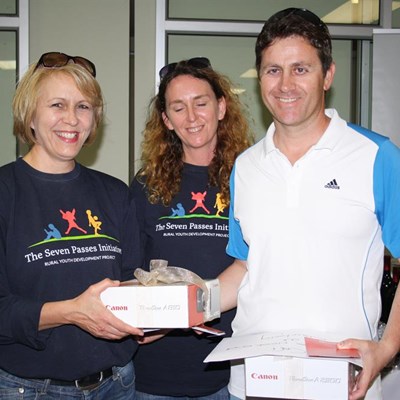 GEORGE NEWS - Besides the sometimes deafening noise of gun fire, stun grenades and other arsenal emanating from Outeniqua Park in celebration of the minister of police, Nathi Mthethwa's visit to George, 60 golfers enjoyed a round of golf next door with only one thing in mind, to raise as much money for the successful Seven Passes Initiative.

Seven Passes Initiative, in association with PathCare laboratory, hosted their charity golf day to support the educational development of children in Touwsranten on Thursday 24 October.

The Seven Passes Initiative, a non profit organisation, currently tends to the needs of 80 primary and 30 high school pupils and is committed to building a safe community of opportunity for the children of Touwsranten and surrounding rural areas.

Seven Passes Initiative also aims to develop the ability of young people to resolve conflict peacefully, to enable them to identify and access opportunities and facilitate improved communication between young men and women.

A grateful Cedrick Buys, manager of the initiative said, "You make it possible for us to do our job." A delighted chairman of Seven Passes Initiative and owner of Mandalay Farms, Peter Leppan, said, "Today was made possible through the generous support of several sponsors, especially our main sponsors Pathcare George. Pathcare Cape Town has agreed to match all funds raised here today rand for rand."
The golf day was won by Gerhard Streicher and Pieter Botma on a whopping 49 Stableford points. Dave Wedon and George Whitehead followed with 48 points and M van der Merwe and W Visagie took third place on a count-out with 47 points.

During the prize giving Leppan awarded two Community Service Awards to both Phillip Kuske and Fanie Smit for the outstanding work they do for the Seven Passes Initiative.

Several items were auctioned during the prize giving where Leppan reminded those present that R150 feeds 80 children for a day. Massimo Mariotti, from Salina's Beach Restaurant Wilderness, outbid all with his R4 000 for a helicopter flip for three people.

To end the day Leppan invited golfers to help themselves to fresh vegetables from the several crates that he had donated from his Mandalay Farms.

The total raised during the Charity Golf Day was not known at time of going to print.