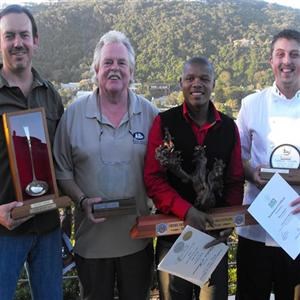 Stefan Jamneck (left) of the Transkaroo Restaurant in Great Brak River is the CXPress Garden Route Gastro Nomix Chef of the Year for 2011. A special award was made to Mike Clarke (second from left) from Clarke of the Karoo in Barrydale. The Ordre Mondial Wine Server of the Year went to Joseph Pietersen (second from right) of Serendipity and the Eden School of Culinary Art Young Chef of the Year went to Matteo Battaini (right) of La Locanda. Photo: Denise Lloyd

GARDEN ROUTE NEWS - Stefan Jamneck of the Transkaroo Restaurant in Great Brak River is the Gastro Nomix Chef of the Year for 2011. He was given this prestigious award at the annual CXpress Garden Route Culinary Awards evening which took place at the new Salina’s Beach Restaurant in Wilderness.

The runner up was Alma Oosthuizen of Chef Alma at Groenvlei. The Gannet Restaurant in Mossel Bay is also one of the Top 20 restaurants in the vicinity.

The cream of Garden Route restaurateurs, chefs and servers were there to share in the fun while the Top 20 restaurants in the area were announced. This year the function was graciously sponsored by Nell-Marie le Roux from NLR Wines.
Celebrity Chef Francois Ferreira, Bailli Délegué of the Chaîne des Rôtisseurs South Africa and foodie par excellence Anne Hadley, spearheaded the panel of judges.

Anne's late husband and long-time CXpress food critic, Ian Hadley, was the initial driving force behind the Gastro Nomix Top 10 Garden Route restaurant awards more than a decade ago. Recently the official nod was received from the South African Chefs Association, who declared the awards a nationally recognised event.

Special Achievement Award
This year the panel made an exception to the geographical criteria, for example just off the Garden Route track, in selecting Mike Clarke from Clarke of the Karoo in Barrydale.
Mike was at the Beacon Isle Hotel for many years, and then popularised Crabs Creek in Knysna. Over the years, Mike has worked hard to keep a consistent high standard of cuisine and service, and Clarke of the Karoo has become a destination restaurant on the R62.

Special Merit Award
This award will not necessarily be granted annually, but only when there is cause to. This year the award went to Kelvin Appelgren of Caloroso Café who, through dedication to his art, has inspired everyone on the Garden Route coffee scene to up their game.