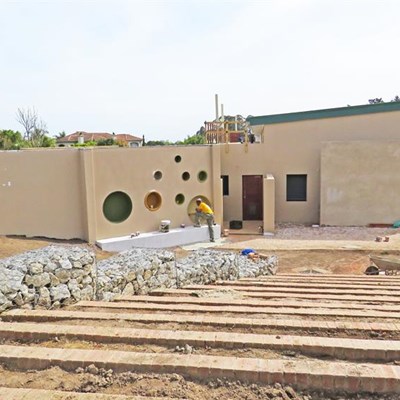 The Garden Route Botanical Garden will soon have an added facility - a mini amphitheater adjacent to an environmental/educational/science centre.
GEORGE NEWS - The Garden Route environmental centre building is nearing completion. It is being funded by the department of environmental affairs and built by GD Projects.
Although the building is seen as an asset greatly benefiting local schools, the department is handing it over devoid of equipment and furnishings.
The Garden Route botanical garden trust (GRBCT) is appealing to donors to come forward and help. There is a long list of equipment needed to get the building up and running and fully functional.
Chairman Colin Ralston says the interior needs tiles, tables and chairs, blinds, microscopes and rock, to mention a few.
"It is hoped that the project will become a real public/private partnership, with governmental funding, corporate donors and individuals all contributing to make this asset work. Besides promoting environmental awareness, we want the building to be multi-functional to generate income to cover the running costs and future maintenance. The centre needs to be a place of learning, but also a fun place suitable for small conferences or other events.
"The building as it stands is already great and flexible, in terms of usage, set in a developing indigenous garden, with a prime view of the Outeniqua mountains."
Ralston invited all interested parties, schools, the Nelson Mandela Metropolitan University and other institutions to give ideas and suggestions for the future use of the centre and ideas to raise funds.
"The prime use of the centre is aimed at education, a place for all to come and learn about our local biodiversity through talks, workshops and hands-on participation. A committee has been formed to determine what should be done and assess the needs of the community."
The environmental centre has a mini amphitheatre for outdoor events, and a designated area for a kitchen. The building design is unusual - a hillock was created and positioned to rest against the southern wall (back wall) - where a collection of rocks from the region will form a backdrop for aloes and other succulents.
This unique design aspect was put forward by architect Sorina van Deventer of Arcxyl Architects. She embraced the idea to have the centre blend into the natural landscape.
"The completion of the project was delayed by three months caused by the late transfer of funds from the department of environmental affairs," said the project implementer, Gina Dyosi of GD Projects and Construction, in May last year. The 425 square metre centre was scheduled for completion in June this year according to the George municipality, the overseer of the project, and owner of the land on which the Garden Route botanical garden is situated in Caledon Street.
The official hand-over was done a fortnight ago, said Dyosi. The finishing touches to the landscaping are being done this week. No official opening date has been set.
Struggle
The Garden Route botanical garden trust is a non-governmental, non-profit organisation which established a world class facility enjoying recognition in botanical circles. Putting the facility to full use will be hampered by the lack of funds to furnish the centre. The GRBG is already struggling valiantly to keep head above water and runs the garden at a R30 000 per month deficit.
According to a source close to the garden, the idea that the GRBG must come up with the money for equipment, is daunting. Over the past 17 years this open space has evolved into a true community facility with open air concerts, dog walking, picnics, park runs, and of course, a favourite spot for wedding photos. The tea garden is an ideal venue for functions.
The Garden Route Environmental Centre role players paid a visit to the building site at the Garden Route Botanical Garden. They are from left, Nina Olivier (Eden district municipality), Gina Dyosi (GD projects), Radie Loubser (George municipality), Londeka Phetha (department of environmental affairs), Yamilen Goliath (Quanto 2000), Cllr Marlene Viljoen (portfolio councillor for environmental affairs and sport at the George municipality) Dawid Hoffman (ARCXL architects), Mario da Silva (GD projects)
Click here for previous articles:
ARTICLE: PAULINE LOURENS, GEORGE HERALD JOURNALIST
'We bring you the latest George, Garden Route news'
Posted on: 14:03 Thu, 27 October 2016
Your Comments