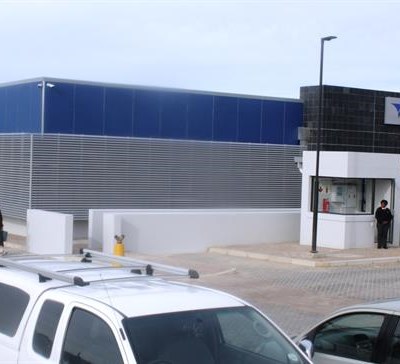 A side view of the new Sars premises. Photo: Alida de Beer
GEORGE NEWS - Taxpayers will now have to head out to the eastern outskirts of George for a visit to the SA Revenue Services.
Sars finally relocated from the York Park building in the centre of town to a brand-new 2500m² building near the Garden Route Mall on Friday.
The offices at York Park closed at 15:00 on Friday, after which the big move of all computer and office equipment started in earnest.
Officials at the new premises were not allowed to comment during a visit of the George Herald, but one said they worked all hours to ensure a smooth transition.
Jannie Joubert from JC Joubert Building Contractors, the main contractor on site, said they completed the building in record time. "We had to put in a lot of overtime and worked weekends and holidays to meet the deadline."
The builders were on site on 25 January and handed over the building on 1 June with fencing, paved parking and car ports completed.
Efforts to obtain permission for a photo opportunity inside the building through Sicelo Mkosi from Sars's communications department, failed. He never got back to the George Herald with a response.
Information flyers have been put up at York Park to redirect members of the public to the new building, which belongs to Rainbow Place Properties, the developers of Eden Meander.
Read a previous news flash: Sars move to new offices starts
ARTICLE AND PHOTO: ALIDA DE BEER, GEORGE HERALD JOURNALIST
'We bring you the latest George, Garden Route news'
Posted on: 07:15 Thu, 30 June 2016
Your Comments