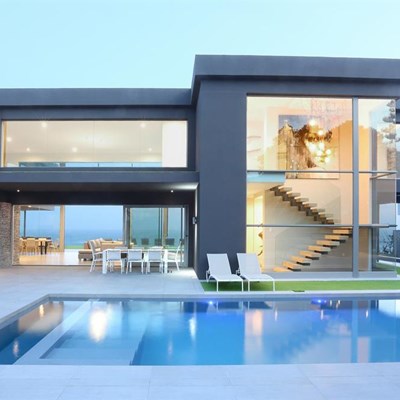 At the private villa, "Hesquin", was designed by architect Eddie da Silva. Innovative use was made of custom-made tiles, Monocibec, Century and Naxos ceramic. This earned the winning team an international award.
GEORGE BUSINESS NEWS - At a glittering ball held in Bologna, Italy, Stevie Joubert of Stiles, a local tile and sanitaryware shop, George architect Eddie da Silva and building contractor Sheldon Bubanj from DMC Developments, were named winners of the fourth edition of the Quinquennial Tile Award. This was the first time an African country won this prestigious award.
It was the trendsetting tiling used at its client's coastal villa in Wilderness that earned the partners this internationally recognized award. Dramatic results were achieved using black slate tiles, as wall cladding in sharp contrast to the white interior gray floor finishes.
At the prize-giving ceremony held on 27 September, the Fincibec Group screened the entries of the five finalists in the Best Project of the 2011-2015 Quinquennial. who had all followed a winning formula. One of the five finalists had entered a block of flats in Greenwich Wharf in London, and another a hotel in Greece, thus jointly formed the most interesting and original works worldwide.
All prize-winners used Monocibec, Century and Naxos ceramic surfaces to interpret their clients' desires and the technical and structural demands of designers.
The jury was consisted of the following judges; Vittorio Borelli, chairman of the Fincibec group (who is also the chairman of Confindustria Ceramica \\Italian ceramic manufacturers); Italian architect Laura Rinaldi and marketing designer Sofia Cortellini.
Outright winners
Eddie Da Silva of Eddie Da Silva Architects and Associates, owner of a George interior shop called Bespoke, designed the private villa "Hesquin", earning the first prize. Steve Joubert from Stiles, a local tile and sanitaryware shop in Commercial Close George, was the tile supplier, and Sheldon Bubanj from DMC Developments, chairman of the Master Builders Association (MBA) Southern Cape was the contractor.
The winning entry was closely followed by a striking building complex under completion at Greenwich Wharf, in London (UK), designed by Squire and Partners; the Lailoria restaurant in Legnano (Milan, Italy), designed by architect Nicola Ghilardi; Hotel Gkeea, a total restructuring of a tourism complex in Chalkidiki (Greece), managed by architect Panou Polytimi; the pool at Borgo della Spiga, a reception facility immersed in the Marches countryside, in Cingoli (Macerata, Italy).
Receiving the first prize, Steve Joubert from Stiles, addressed the audience of 500 people. "This is one of the greatest honours to win in the construction industry. It was also wonderful to be involved with such a magnificent masterpiece and win a design award in Italy, the home of great architectural trend and design."
He paid tribute to the other finalists, saying their projects were undertaken by great designers. The crowd showed great enthusiasm while being shown a slide show of the magnificent work of Eddie Da Silva.
The prize-giving coincided with the Cersaie Week, the international trade show dedicated to architectural ceramics, where Bologna has become the perfect centre stage from which to showcase and celebrate the best the architectural world has to offer. And also the perfect occasion to launch The Quinquennial Tile Award prize-giving. This editorial has already been published in an international flooring magazine, FloorBiz, the world’s largest flooring portal.
Winning villa
The private villa designed by Eddie Da Silva Architects and Associates is situated on the Dune, Wilderness and was designed to maximize the magnificent view of the coast. Da Silva said, "This home was designed for a French couple to use as a holiday house on the beach in Wilderness, taking full advantage of the northern and southern aspects.
The northern aspect is very important as this has a direct impact on natural light and warmth that gets generated into the house. When the doors are open on the north and south sides, one has a seamless flow from the pool are on the northern side to the sea, and the beach on the southern side."
"The kitchen and living areas, all open up to both of these areas, which creates a seamless interaction between exterior and interior. The exterior tiles, as well as the tiles in the pool-house and around the pool, were custom made in Italy to match the interior tiles.
Thanks must go to the factory that could make an anti-slip tile to match the interior tile. The interior has a minimalistic and uncluttered feel, rather placing a lot of emphasis on the sea and to the mountains on the northern side. A dark charcoal colour was chosen for the exterior, this in contrast with the light walls in the interior."
For the choice of tiles, the architect worked closely with the owners and the tile company, Stiles, as the tiles were a major part of the residential project. The bathroom's tiles were a very important factor of the design feature of this home. The kitchen has a clean contemporary feel.
There is a spine-wall running through the house, cladded with dark ribbon stoning with copper colours. The furniture is practical and fits in well with the overall uncluttered house on the beach.
Well done, Stevie Joubert, Eddie da Silva and Sheldon Bubanj of Southern Cape.The threesome won the fourth edition of the Quinquennial Tile Award on 27 September. This was the first time an African country won this international award.
'We bring you the latest George, Garden Route news'
Posted on: 07:17 Thu, 20 October 2016
Your Comments