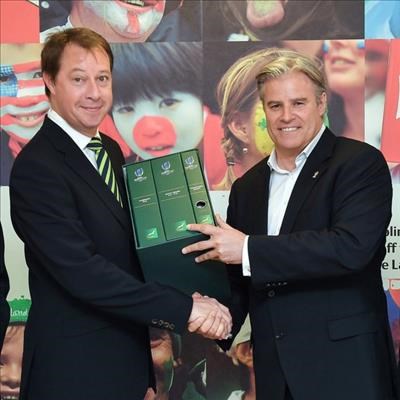 RUGBY NEWS - South Africa may have their noses in front in the race for the 2023 Rugby World Cup, having been nominated as the preferred candidate by World Rugby, but there is still a fear that the bid may be scuppered at the last minute.

Of course, it is a valid question to ask why World Rugby would go to excruciating lengths to set up an independent committee of rugby people and business analysts to probe, investigate and weigh up all three candidates, only to not then take that recommendation as word that South Africa has the best chance of a successful tournament?

World Rugby set up this process precisely for that reason - to be transparent and to make sure the decision was not only a well-weighted one, but also one that could stand up to scrutiny, and would not be plagued by accusations of underhanded jockeying away from the actual vote.

If the process were to be disregarded, it would undermine everything the organisation stands for, it would make the bidding process a mockery, and leave the organisation discredited as a place where influence behind the scenes trumps facts. This is hardly the scenario that World Rugby would want to create.

Given the problems football’s governing body Fifa had with the awarding of the 2022 Football World Cup to Qatar, major sporting bodies are wary of the fallout of accusations of bribery, corruption and skulduggery of any form. World Rugby is not immune, it is an Olympic sport now as well, and has an image to protect.

It was good to see SA Rugby’s CEO Jurie Roux point out that the jockeying has to stop in the next few weeks before the vote is taken, and given the fact South Africa are the preferred candidate, it should be a fait accompli that the tournament should head to these shores for the first time since 1995.

“Hopefully Ireland and France, like us, will stick to the moral high ground," Roux said.

"You can't add any more information, you can't present to anybody, you can't do any more presentations ... all you can do is ask for the process to take its normal course and hopefully not be part of anything untoward.

"What we will do is keep on feeding information on our bid and the fact that we're grateful that we're over the first hurdle.

"Other than that, we honestly can't do anything other than walk into the council meeting (on November 15) and hope that everybody has made the right decision."

But already both France and Ireland have indicated they will fight to the end, and will approach all voting members to try and sway the votes.

If they succeed, it will say more about the moral conviction of the World Rugby members and tarnish the sanctity of, not only the process, but the game itself.

Ireland point to the fact that Rio was fifth in the bidding recommendations but won the 2016 Olympics. That is hardly a basis for changing the vote.

Similarly, it was the Irish who went against the grain and gave New Zealand the 2011 World Cup in 2005, shocking many in the South African delegation back then, even though New Zealand’s assessment wasn’t the best of the candidates.

Irish rugby CEO Kevin Potts told the Irish Times they had a strategy to change the members’ minds, and would be counting on support – such as New Zealand’s Sports Minister who has publicly backed Ireland – to cause a massive upset.

“There’s a lot that can be done in the next two weeks, and we will speak to all of the unions, and we will try and convince them that nothing has changed with Ireland’s vision,” Potts said.

“We are clearly up against two big, experienced countries. We have put forward a world-class bid. Rugby World Cup have confirmed that we can deliver a tournament, and we believe that there are many unions around the world who will look favourably on an Irish tournament.”

The report does not examine each country’s capacity to fill those stadiums, and Potts added: “I guess in the next two weeks these issues will have to be brought out to bear by World Rugby Council members.”