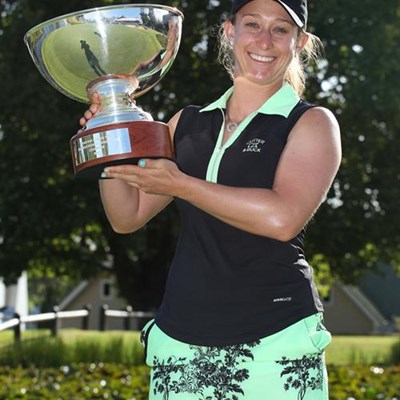 KwaZulu-Natal’s Melissa Eaton carded an opening two under 70 at Oubaai and looked poised for her maiden breakthrough on the local circuit when she teed off with two stroke lead.

However, it was Bregman who got the measure of the Gary Player-designed championship layout of the Outeniqua course at Fancourt in the final round.

Just two weeks after she denied Eaton by one stroke for the Sun International Ladies Challenge title at the Lost City Golf Course, Bregman fired a one-under-par 71 to edge out Eaton again on a winning total of one-under-par 143

The victory not only earned Bregman the winner’s share of the increased R200,000 prize fund worth R28,000, but she grossed 320 points in the Chase to the Investec Cup for Ladies and vaulted into the top spot in the standings.

“Now I really feel vindicated about my decision to skip the first couple of Ladies European Tour events in Australasia,” said the delighted champion, who shared centre stage at the prize giving with Dimension Data Pro-Am winner, Branden Grace.

“I missed the first couple of Sunshine Ladies Tour events last year and I ended up missing out on the Investec Cup for Ladies by just one spot.

“I decided to stay home and support the Sunshine Ladies Tour this season and one of my goals was to try and win a couple of tournaments to make sure I make the final. It’s been fantastic to start the season like this and build some confidence for the Ladies European Tour in March.”

Bregman and Eaton both bogeyed the first hole, but Bregman backed the loss with a birdie at the par-five second. She dropped another shot at the par-four fifth before she turned the tide with three birdies on the trot from the seventh.

“The greens were playing firm and a little quicker in the practice round,” Bregman said. “The rain softened them up, though. I misjudged the pace at the start of the round. I hit it really close at seven, pitched it to six foot at the eighth and drained a 20-footer at the ninth to put some pressure on Mel.

“I let Mel in when I missed my return putt for par at 15, though. She birdied and the difference was down to two strokes. That freed her up a bit to have a go over the last holes.”

Eaton had a chance when she knocked it inside Bregman at the par-four 16th, but she left her birdie putt just an inch short of the hole.

“Mel hit a monster drive down the 17th and took on the green and left herself a 15-footer for eagle,” Bregman explained. “I was in the greenside bunker and I hit a good trap shot and saved par. Mel tapped in for birdie, though, so we both felt a little de-ja-vu walking up the 18th fairway.”

Their tee shots landed almost next to each other, just like at Sun City, but at least this Bregman had a one stroke edge.

Eaton’s approach pitched on the edge of the green, while Bregman’s finished right of the pin.

“We both had 15-footers for birdie, but we both missed on the first try,” said Bregman, who tidied up for the one stroke victory when she knocked in a three-footer for par.

Ashleigh Simon finished third on five over 149, but rounds of 75 and 74 was good enough to give the three-time Sunshine Ladies Tour winner and her amateur partner Michelle de Souza victory in the Betterball Medal competition.