Fuel price down in March

Motorists can breathe a sigh of relief this month after the announcement that the petrol price will decrease again by between 19 and 54 cents a litre this week.

NATIONAL NEWS - Motorists can breathe a sigh of relief this month after the announcement that the petrol price will decrease again by between 19 and 54 cents a litre this week.

The Maximum Retail Price for LPGAS will decrease by 32 cents per kilogram.

The department said the average international product prices for petrol, diesel and illuminating paraffin decreased during the period under review.

“The Rand depreciated against the US Dollar during the period under review, on average, when compared to the previous period,” said the department.

The March product price adjustment is the third consecutive drop in the petrol price since the start of the year. This might be the last month where the petrol price goes down like that after Finance Minister Tito Mboweni announced fuel levy increases during his Budget Speech last week.

The Automobile Association said in a statement. “Previous years have seen higher than inflation-linked increases to the fuel levies – the General Fuel Levy, the Road Accident Fund levy, customs and excise taxes, and the Carbon Tax. However, given the fact that many South Africans are buckling under severe financial constraints, such an increase this year will be more than detrimental, it could be catastrophic.”

Here are your March petrol and diesel prices: 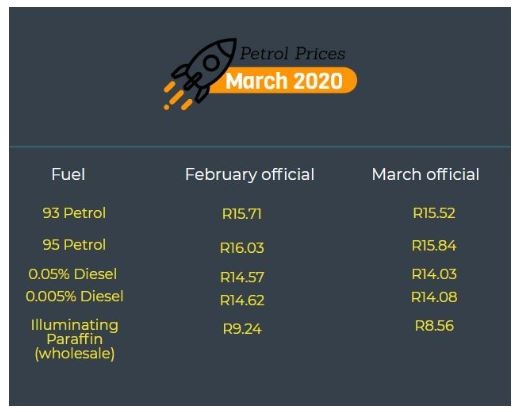