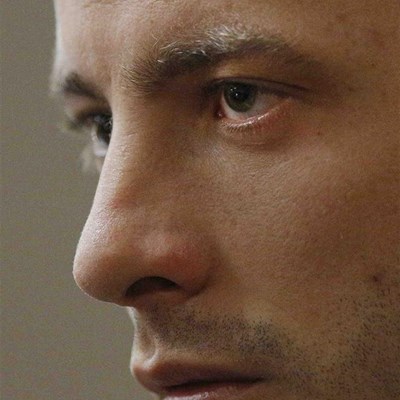 Oscar Pistorius. Photo: Sapa
NATIONAL NEWS - Journalists, in numbers not seen since the first week of Oscar Pistorius's trial for murder, queued outside court GD of the High Court in Pretoria on Friday morning.

The increased media attention followed speculation that the paralympic athlete would testify in his own defence in the fourth week of his trial.

He is accused of the murder of his girlfriend Reeva Steenkamp in his Pretoria townhouse on February 14 last year.

A path was cleared through the throng for three members of the Meyers family, mother and two daughters, to make their way into the court room.

Friends of Steenkamp, all wore black and sported the same hairstyle and tense faces.

Warrant Officer Etsebeth and security guards had their hands full to prevent several people from bundling through the court's doors at the same time.

The last row of the public gallery, reserved for the public, was already full at 8.50am, 40 minutes before the start of the day's proceedings.

Outside court, as Pistorius arrived, a woman shouted "ons is hier vir jou" (we are here for you). People cheered as he walked past.

He entered the court room alone through the side entrance and made his way to his seat in the dock as a photographer snapped pictures. He sat quietly and appeared to be looking at his cellphone.

Then he got up to speak to two members of his legal team, and accepted a mint from one of them, Rohan Kruger.

Pistorius has been charged with the murder of Steenkamp and contraventions of the Firearms Control Act.

He allegedly fired a shot from a Glock pistol under a table at a Johannesburg restaurant in January 2013.

On September 30, 2012 he allegedly shot through the open sunroof of a car with his 9mm pistol while driving with friends in Modderfontein.