IT’S always great to drive the reigning Car of the Year before the judging process for the current year’s competition begins. Only this time I feel that last year’s winner is a tad more special and indeed worthy of more of an introduction than most. 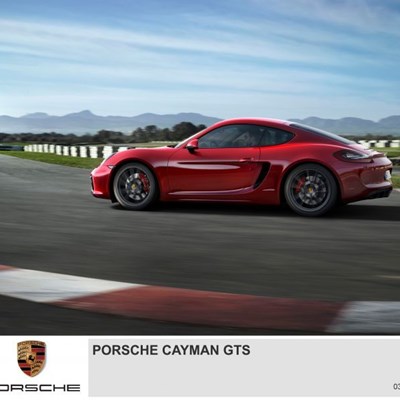 The Porsche Cayman S won the 2014 South African Guild of Motoring Journalists (SAGMJ) Car of the Year (COTY) competition and recently, the folks at Porsche gave me a go in the Cayman GTS.

I have something to get out of the way before I get sidetracked (if you’ll pardon the pun). The Cayman is simply the best-handling car I’ve ever driven. From its communicative steering, to its slightly naughty over-steer to get the vehicle’s rump to line up into the corner and then the neutrality of it mid-corner and on exit; it just feels like you can obliterate a track in this thing!

Apart from the iconic models to have worn the GTS badge over the years, what does this GTS bring to the Cayman recipe that spices things up a bit? Well its 3.4-litre flat-six engine, beefed up to produce 250kW/380Nm, which is around 11kW up on the S model. Up here at the reef the vehicle does lose a bit of power however, it never felt as if it was lacking grunt during my tenure.

The Porsche Active Suspension Management (PASM) and the Sport Chrono package are also standard, which sharpen up dynamics, while the Chrono pack provides a sportier steering wheel, live telemetry and sharper throttle response. The feeling is instant when you select Sports Plus as the car immediately wants to dart into bends and get on with the business of going fast.

The GTS also looks meaner, with restyled bumpers for aerodynamics, black headlamp surrounds and 20-inch wheels, akin to those used on previous GT3 models. It certainly looks the business with its black badging, too.

There’s also GTS DNA in the cabin with lashings of Alcantara everywhere, while subtle GTS insignia is visible throughout the interior, such as in the instrument panel and on the sport bucket seats. The interior is just such a nice place to be; it feels right, from the seating position to the quality of the materials - it impresses.

There is no such thing as a perfect vehicle and the Cayman presented two issues within its cabin that I feel are very minor in the grand scheme of things. First off, the centre console features many buttons; some may enjoy this but I feel it could be streamlined. Secondly, the Sports Chrono steering wheel does not have steering-mounted controls and therefore means that changing the volume or station/track necessitates, looking downward.

In addition to providing an epic soundtrack and visceral driving experience, I was also very impressed with how well the Cayman performed day-to-day tasks. When the vehicle isn’t in Sport or Sport Plus mode, it becomes as usable as any two-seater with great levels of comfort, quality and even two luggage areas, one up front and one at the rear as the engine sits in the middle.

The fuel consumption was also reasonable. I found myself achieving figures of between nine and 10 litres/100km during a week where load-shedding had Johannesburg roads under siege.

I had such a great time with the Cayman GTS, there wasn’t a moment where I didn’t feel that I was driving a thoroughbred sportscar. If this is the “baby” Porsche, I shudder to think how competent the 911 models must be, or even how good the upcoming Cayman GT4 may be.