As many of you may have heard, Peugeot has committed to entering the Dakar Rally with its 2008 DKR that will be piloted by two very capable Dakar veterans, Carlos Sainz and Cyril Despres. The Team Peugeot Total has its work cut out for it with the next Dakar taking place in January 2015. 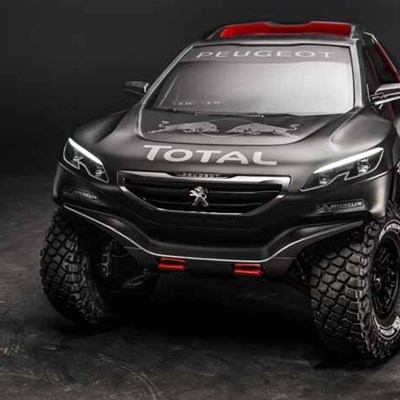 Both Red Bull and Total have decided to join forces to contest the 2015 Dakar. The 2008 DKR may share a few aesthetic traits with the 2008 crossover, but underneath this a full factory competition machine. Giovanni Rizzo, the man who penned the 2008’s exterior said, “There were two ways we could have approached this task: either by taking a standard 2008 and grafting on bespoke parts, or else by drawing inspiration from the 2008’s defining overall forms to design a car that covered the constraints inherent in its mission. We eventually decided to go down the second path to produce a fresh take on the 2008. For example, the 2008 DKR doesn’t have rear doors, so it’s more like what a coupé version of the model might be.”

The team decided to go with a two-wheel drive format as it believes that the extra suspension travel and bigger wheels (37-inch Michelins) it affords is worth the exclusion of four-wheel-drive. The underpinnings of the 2008 DKR are a being kept under wraps for now and will be revealed later in 2014 in the build-up to the 2015 event.