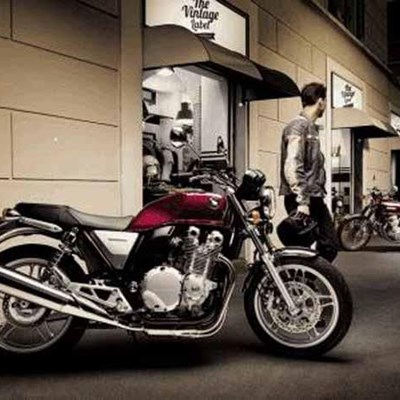 The CB750F was Honda’s world-beater when it was introduced in 1969. With an air-cooled SOHC 749cc four-cylinder engine and a single-disc brake up front, a blueprint for the mass-produced superbike had been drawn.

Purists will be excited to hear that the CB1100 will feature an air-cooled motor and a five-speed gearbox like its grandfather. Efficiency is said to come from the PGM-Fi fuel-injection system that utilises one 36mm throttle body for a claimed fuel consumption of 5.49 litres/100km.

The motor produces 66kW of power at 8 500rpm and 93Nm of torque at 5 500rpm. The power figures seem underwhelming, especially when the bike has a kerb weight of 248kg. But when you consider that the bike was made for riding pleasure as opposed to outright performance, the figures make sense. Instant torque and a smooth power delivery were top priorities on the CB1100.

Although this will decrease performance when compared to a liquid-cooled unit, chief designer Misuyoshi Kohama maintains that the “metallic” sound created by an air-cooled motor is preferred by customers. “A motorcycle engine should have oil in it, not water. Just looking at the cooling fins inspires me,” says Kohama.

The nostalgic styling cues were first seen at the Tokyo Motor Show on the CB1100F. The response from the public prompted Honda to put the bike into production. Design features include a large round headlight, scalloped fuel tank, analogue dials, side-swept 4-2-1 exhaust system as well as chrome detailing around the bike.

“Multi-purpose” is one word to describe the bike’s chassis, as it has been set up to provide a blend of sporty performance with comfortable touring qualities. It features a tubular steel double-cradle frame with four rigid- and two rubber mounts. Conventional telescopic forks are used and are spring-preload adjustable, as with the Showa rear shocks.

Old school 18-inch five-spoke wheels use 110/80-18 and 140/70-18 tyres while the ABS braking system featuring 296mm floating discs up front with four-piston Nissin callipers and a 256mm single-piston calliper at the rear remind you that this is a modern bike.

The circular analogue speedometer and rev counter harks back to the Honda models of yesteryear, while other features include a fuel gauge, a clock as well as a centre stand and passenger grab rail.

The CB1100 will retail for R117 900 with three colour options available. The colours include Pearl Milky White and glory red that both feature Eternal Silver side panels and Graphite Black with Graphite Black side panels.