SOME of the world’s most successful people are said to have been rule breakers. Our road users seem to thrive on that same idea, though in their case it’s a misconception they are just too stupid to fathom. 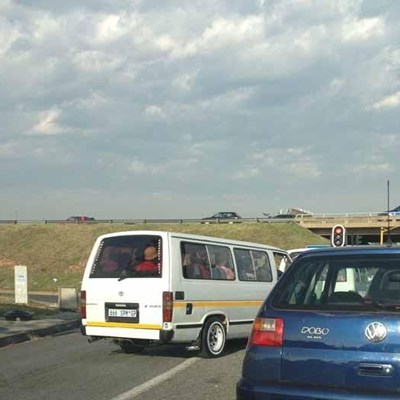 WE WEEKLY receive letters about the fact that road safety is only a secondary concern to the powers that be. Their main concern seems to be money and the easiest way to make it, thus their extreme concentration on speeding and drunk driving. This in itself comes with its own perk, that making their work hours and shifts easier to manage as traffic officers only stop for alcohol testing at night.

Provided you don’t break any of these two laws, you can seemingly break all the others.

They can talk all they like about enforcing road safety to the max, but their actions say that speeding and drunk driving are the only killers on the road. That is how it goes in Johannesburg (or JHB, for all intents and purposes here).

On my way to work this morning, I decided to take the stretch of Main Road from William Nicol to Republic (I only made it to Dover and then took a detour out of sheer frustration). Nothing happened that I hadn’t seen before, but I was driving a Volkswagen Amarok, which meant that I had a nice and high vantage point from which to watch all the action.

Taxis, as we all know, are exempt from road and traffic laws and all we can do is scream and shout as they stop anytime, anywhere for business.

Also to everyone’s knowledge and experience, they speed past traffic in the left-hand shoulder (in queues of four and five) and when it ends, they just cut into the traffic.  When the space in the left-hand late isn’t sufficient for its whole length, it will cut further right into the next lane.

But let’s leave the taxis be for now, because there are normal, otherwise-respectable civilians doing exactly the same. My special example here is a woman in a pink-purple headband in her white BMW just coasting along when the ‘shoulder traffic’ also came to a standstill.

When she eventually had to cut into traffic, I decided to stop and let her in (the pay-it-forward concept I practise when I’m so inclined). Clearly I didn’t do it as swiftly as to her liking, because instead of thanking me for my consideration, she stuck her hand out the window and demonstrated into which orifice I could stick her cigarette.

I don’t need to state that driving in the shoulder is illegal, but the problem here is that it’s a situation that won’t ever change. JHB’s roads are so congested that it’s apparently impossible to enforce traffic laws (they are, however, able to collect your criminal debt via cash or card at those nifty road blocks on William Nicol, where they have awesome machines that scan your licence plate for fines, because traffic there clearly isn’t slow enough).

The other day I attempted to turn right from William Nicol (as you can gather, that street is my personal hell) onto the N1 South. I was in a queue that took me about 10 minutes to actually reach the robot. I was in the left-hand lane to turn and as I was about to, a stampede of four taxis, an X5 and a Kia Rio almost pushed me into the cars on my right as they turned to be somewhere for some Pirates versus Chiefs game. There wasn’t a lane provided for them to turn right, so they decided that I was in their way and used half of mine.

These, of course, are only two examples of laws than can be broken without fear of apprehension. That’s where taxis are setting the example, I suppose.

But let’s say that a magical JHB did exist, one where we were protected from ignorant and selfish idiots who endanger our lives (and their own, but they clearly don’t care about their own lives, so why should we?), where they are held accountable for their ‘silly’ and ‘petty’ crimes that don’t hurt anyone. Let’s call this magical place *JHB*.

I don’t expect everything to be perfect in *JHB*. I know that there are people who sometimes break the law out of necessity, like the very imminent birth of a child. I’m also not saying that the traffic department guard every street corner; people with driver’s licences are grown-ups after all.

All I want in *JHB* is to have these immature aberrations that endanger other people’s lives be held accountable. If you have to push in front of me because you are accidentally in the wrong lane, at least say thank you, but if you drive in the shoulder, a little camera will be there to take a picture of you. In *JHB*, you will be seen and regarded as the dirty criminal that you are.

But at the end of the day, we are in JHB, not *JHB*. In all probability, nothing will change, except the legal alcohol limit, which seemingly will enter the minuses at the rate the money munchers are lobbying.

So, welcome to JHB, where we’re back in alcohol prohibition and live happily ever after in traffic anarchy.