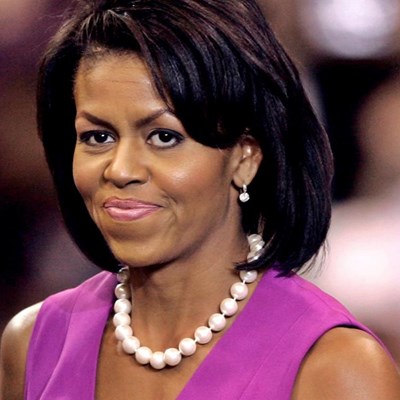 Michelle Obama
INTERNATIONAL NEWS - In a country where obesity is rampant, the US government on Thursday aimed to make healthy choices easier for consumers by proposing a series of changes to nutrition labels.

If approved, the fine print would display calorie count more prominently, include more realistic descriptions of what amounts to a serving, and add a new line to detail "added sugars" -- not just total sugars.

The changes will likely take years to implement but administration officials said they hope that the first major overhaul of nutrition labels in 20 years will give Americans new tools for fighting the battle of the bulge.

"You as a parent and a consumer should be able to walk into your local grocery store, pick up an item off the shelf, and be able to tell whether it's good for your family," said a statement from First Lady Michelle Obama released ahead of the 11:00 am (1600 GMT) announcement.

"This is a big deal, and it's going to make a big difference for families all across this country."

The changes proposed by the US Food and Drug Administration would also attempt to eliminate confusion about how many servings a container holds, and how many calories are in a serving.

Under the new proposal, if a soda is 20 ounces (0.6 liters), the calorie count on the label would reflect a 20 ounce soda. Currently, the advertised calories represent one serving, regardless of how many servings are inside. In a 20 ounce soda, there are 2.5 servings, which experts say can be misleading.

Labels would include mandatory potassium and vitamin D amounts, but fat content would be less prominent, since health experts understand more today than they did 20 years ago about good and bad fats, administration officials said.

The proposals are open for a 90-day comment period and would likely take at least two years to implement, administration officials told reporters ahead of the White House event.

For Obama, advocating healthy eating and exercise, particularly among young people, has been a centerpiece of her efforts since her husband was elected president in 2008.

More than one third (35.7 percent) of Americans are obese, according to the Centers for Disease Control and Prevention, a trend that has remained steady among adults in recent years.

But new CDC data released earlier this week showed, for the first time, a steep 43 percent drop in obesity among the very young, aged two to five, signaling potential progress against the epidemic.

Some pushback over the labels is expected from the food industry, particularly regarding salt and sugar content.

Daily value of sodium would be slightly reduced from 2,400 to 2,300 milligrams per day. People at risk for high blood pressure should limit their intake to 1,500 milligrams of sodium daily, but that would not be declared on the label.

"We look forward to working with the FDA and other stakeholders as these proposed updates to the Nutrition Facts label make their way through the rule making process," said the Grocery Manufacturers Association, an industry group.

"It is critical that any changes are based on the most current and reliable science. Equally as important is ensuring that any changes ultimately serve to inform, and not confuse, consumers."

Some 700,000 grocery store food products are emblazoned with the nutrition facts label, which has only undergone one update in two decades, and that was to add a line about trans fat content.

"To remain relevant, the FDA's newly proposed Nutrition Facts label incorporates the latest in nutrition science as more has been learned about the connection between what we eat and the development of serious chronic diseases impacting millions of Americans."