Buzz Aldrin has landed - for the Apollo 11 anniversary

INTERNATIONAL NEWS - The suspense had been building for 24 hours: would Buzz Aldrin, the second man to walk on the Moon, show up Wednesday night in Huntsville, Alabama - nicknamed "Rocket City" for the nearby NASA space flight center?

Public appearances by the former astronaut, now 89, are rare. On Tuesday, he left his former Apollo 11 crewmate Michael Collins in the lurch.

Aldrin declined to join him at the Kennedy Space Center in Florida, where the two were supposed to appear together on NASA TV to mark the 50th anniversary of their mission (Neil Armstrong died in 2012).

"Thank you," he said to the dinner attendees who surrounded him, but at a respectful distance. Faced with such an iconic figure, the crowd controlled itself.

He intermittently drops tense smiles, "hello's" and "okay's" to the admirers who dare to approach him. Word gets around that he's not signing autographs, but people sneak selfies as he walks past.

One of the event organizers takes advantage of his role as Aldrin's guide and asks him to pose for a photo with his family - a true privilege. Tickets to the event started at $395. 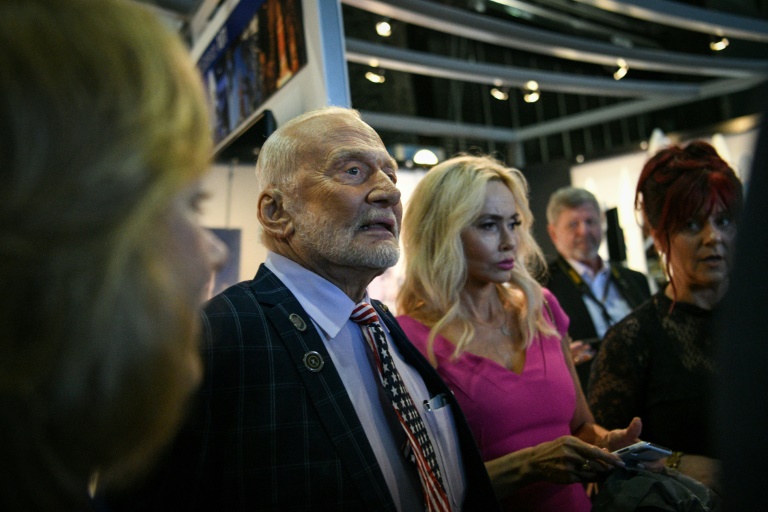 Former Apollo 11 astronaut Buzz Aldrin holds his girlfriend's hand as he walks to his seat.

Throughout the walk to his seat - around a hundred yards - Aldrin holds his girlfriend Anca Faur's hand tightly. Visibly winded, he pauses several times to catch his breath, a hand gripping the backs of chairs.

Once seated, Faur points to the massive Saturn V rocket hanging above their heads, spanning the length of the hall. "Where were you?" she asks him.

He points to the tip, the tiny capsule that took him to the Moon and back.

Former astronauts have strong opinions on the delays and revisions of the American space program since the Apollo mission. In 50 years, no one has returned to the Moon, and Mars seems an even less attainable dream. 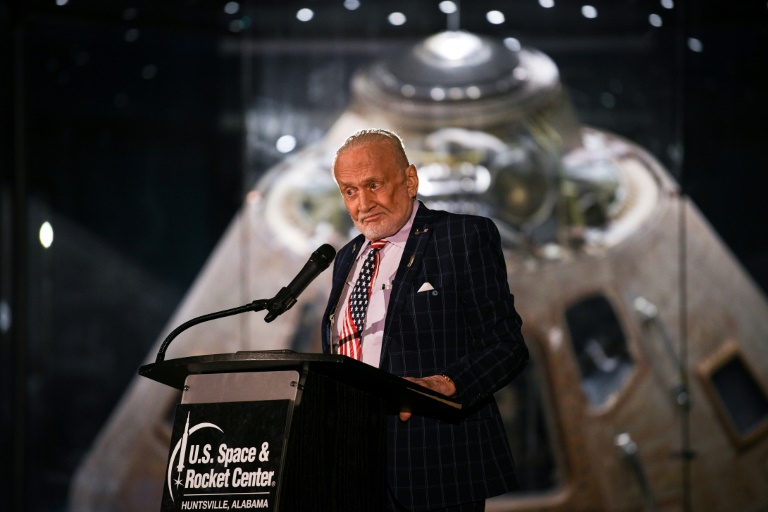 Buzz Aldrin took to the podium to call for more space exploration.

When he finally stepped up to the podium, Buzz did not miss the opportunity to lecture his audience, which consisted of American elected officials from states linked to the aerospace industry.

"Many of us who followed Neil may still feel we are waiting for that giant leap after landing on the Moon," he said, switching between jokes, slightly confusing technical reflections and critiques of NASA.

He also poked fun at the Orion capsule, which will carry the next astronauts but won't be able to maneuver around the Moon much. For 50 years of progress, he noted, that was "not very good." "What is needed now for our country is the next step space alliance - that's the gathering together of the capable entities, space agencies and other contributors," he said.

"Then we can all put together what is really needed (financially) to get to Mars."

After half an hour, one man asked Aldrin what he had to say to people who doubted he had actually walked on the Moon.

"Join the crowd that's going to charge into Area 51," he replied, referring to the million people who replied to a Facebook event saying they would storm the desert research facility, which supposedly has aliens inside.

"Maybe you'll find out there," he said. And then he finished his speech with a military salute.

"Amazing," the host noted, after Aldrin left the stage.