Thembalethu riots: 7 out on bail 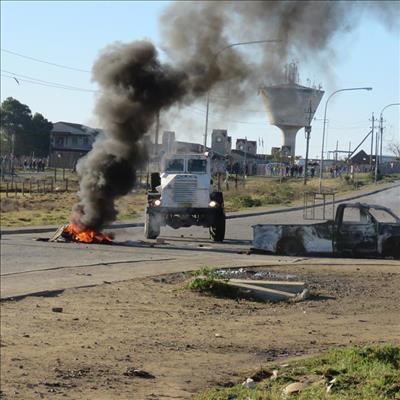 Normal business in Thembalethu was severely disrupted during the riots. Photo: Zolani Sinxo

GEORGE NEWS - The seven suspects who were arrested following the Thembalethu illegal protest which took place on Wednesday 12 July have been released on bail of R300 each.

The suspects appeared in the George Magistrate's Court on Friday 14 July. The court heard that suspects' home addresses have all been verified and that they are not a flight risk.

They will appear again on 24 August. According to Thembalethu police communication officer Capt Dumile Gwavu the suspects, all men aged between 20 and 30, were arrested for public violence and malicious damage to property.

During the protest several vehicles, three of them police vehicles, were damaged when protesters threw stones at them. Three other vehicles were also set alight. The protesters blocked the entrance to Thembalethu, throwing stones and burning tyres.

"Nine cases of malicious damage to property and public violence have been opened. Two vehicles, belonging to the municipality and M Sec Security, were completely burned out. More arrests may follow as the investigation continues," said Gwavu. Chantel Edwards-Klose, spokesperson of the George Municipality, said Mayor Melvin Naik has arranged a meeting with the delegation representing the protestors. The meeting was arranged for Wednesday 19 July.

Edwards-Klose added that the municipality is in the process of determining the full extent of the damages caused by the protest. "But we can advise that damage to paving, road surface and traffic lights is in the region of R130 000. One municipal vehicle was destroyed and a second badly damaged."

The riots followed after the protestors received a letter from the municipality on Tuesday 11 July in response to their housing and service delivery grievances which they had forwarded to the municipality during their peaceful march on Tuesday 27 June. They were unsatisfied with the contents of the letter.

The spokesperson and convenor of the march, Aviwe Mbangu, said he can only comment on the matter after they have met with the municipality.