"It's early still, because any super spreader event can tilt it the other way. But it is a sign that if we work together and maintain (the trend) we can see a decline in the next week or two."

GARDEN ROUTE NEWS - The Covid-19 resurgence in the Garden Route is starting to show early signs of peaking.

The number of infections and hospitalisations in the district is almost double than in the first wave, but the tempo of the increase of infections is stabilising.

According to Western Cape head of Health Dr Keith Cloete, this is seen when comparing the increase in new infections over the last seven days with the increase over the previous seven days. "It's early still, because any super spreader event can tilt it the other way. But it is a sign that if we work together and maintain (the trend) we can see a decline in the next week or two."

He said the impact of the Garden Route's infections has caused the total number of rural infections in the province to surpass the first wave. The next area of concern where infections are rising sharply is the Cape Winelands. Cloete said they can pinpoint how the movement of people within the province and between the Western and Eastern Cape is impacting on the increase in cases and new areas of infection.

Cloete said the proportion of positive cases in the province is now 30%. It was 40% at the peak of the first wave. Hospitalisations are also heading for first wave levels. "We must be mindful that this time we do not have the protection of the lockdown or an alcohol ban (to curb infections)."

The toll on health care workers (HCWs) has been the biggest at George Hospital where 49 have become infected over the past four weeks.

Groote Schuur and Tygerberg (that are five times bigger than George Hospital in terms of staff and beds) had 43 and 40 HCWs affected respectively. Mossel Bay Hospital, a small hospital even compared with George, is fourth with 28 infections.

In total, 204 healthcare workers in the province have been infected.

Three healthcare workers have died in the past two weeks and 25 were hospitalised in the province.

Statistics of deaths in the Garden Route have shown that the probability of dying has increased by 20-40% when the daily admissions start increasing by over 30 cases. "This is an indication that we have done exceptionally well out of the first wave by introducing high-flow oxygen and treatments such as dexamethasone. We have brought the mortality down and as long as the admissions are low, we can get very good outcomes. The moment admissions start increasing, you start losing some of those outcomes because you have more people needing to be managed with very concentrated resources."

Contact tracing teams are under immense pressure because when cases reach over 1 000 per day, an average of five contacts must be followed up for each infected person - that is 5 000 people per day that have to be traced. Cloete said it becomes logistically very difficult to remain on top of the numbers.

Covid-19 testing is also under strain at the point where the samples are taken and sent off, but not in the labs where the tests are done.

Premier Alan Winde's message today was once again that cooperation from the public is needed to avoid stringent restrictions and a lockdown.

He appealed to the public to use alcohol sensibly as trauma cases resulting from alcohol place a huge burden on health facilities. The increase in alcohol usually seen over the December season is cause for concern.

He put out a "summer season challenge" to all citizens to play their part in flattening the curve. 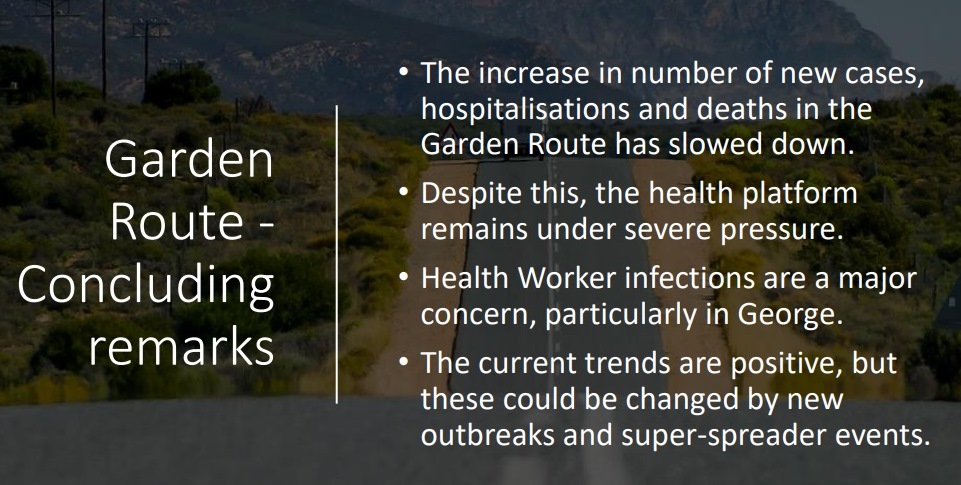 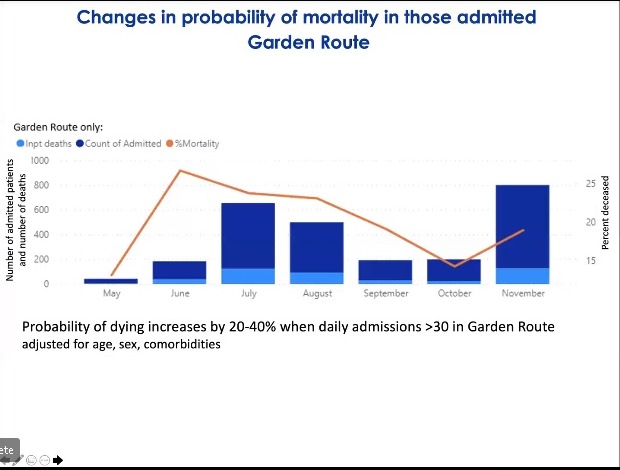